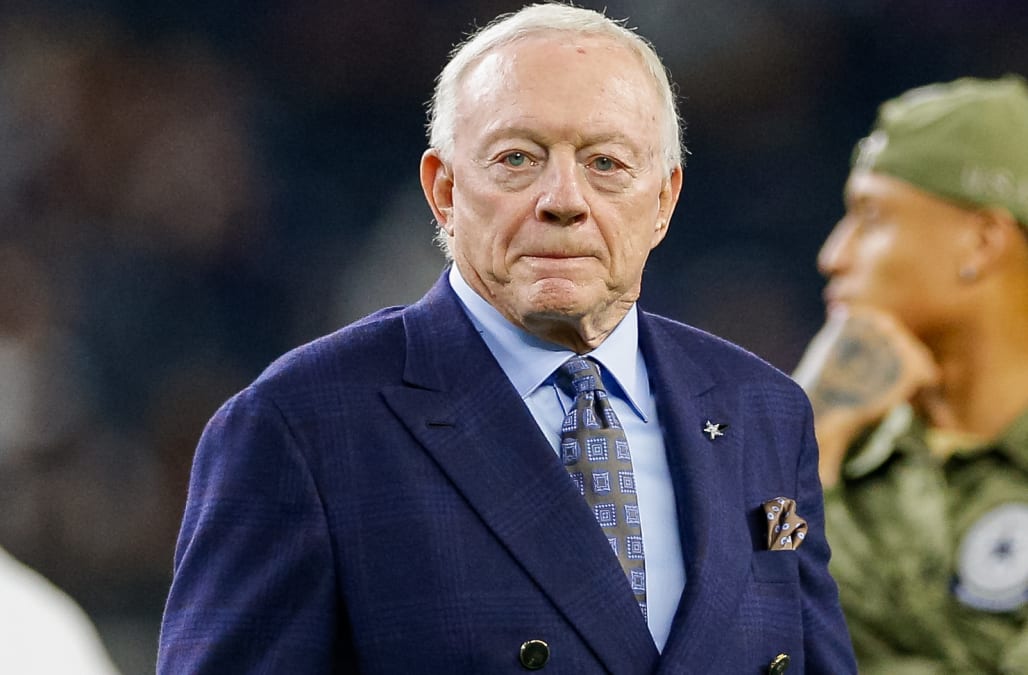 On the verge of his induction to the Pro Football Hall of Fame, Jerry Jones sat in a hotel room in the summer of 2017 and waxed pridefully about his beginnings with the Dallas Cowboys. He spoke of success and mistakes. He revealed a sliver of regret about his ego getting in the way with Jimmy Johnson. He talked about firing Tom Landry being one of the toughest things he’d ever done, and how the initial foray into NFL ownership had him “scared sh–less”.

Near the end of the conversation, he said this: “There aren’t too many things I wouldn’t do financially to win another Super Bowl. I’ll tell you what — it would be something indecent. There isn’t much I wouldn’t do.”

Nearly three seasons later, sitting at 6-6 after a Thanksgiving Day loss to the Buffalo Bills, Jones is seemingly no closer to his next Super Bowl than he was on that afternoon in 2017. He’s all over the map on head coach Jason Garrett, alternating between putting pressure on his head coach and then essentially calling him a grandmaster of NFL coaching. At any given moment, he’s mad, tearful, frustrated — or promoting hopeful visions of a fairy-tale championship ending to a season in which his franchise is 0-5 against teams with winning records.

We’ve already spent the better part of a week wading into that exhausting roller coaster of emotions. Perhaps it’s time to drill down on Jerry’s “there isn’t much I wouldn’t do” proclamation about winning his next Super Bowl. The one he has made several times over the past few years and repeated frequently during his Hall of Fame media tour in 2017. In the wake of Jones’ latest supportive diatribe on Thursday — where he spoke about knowing the character of the coaches he put into the locker room and how he and Garrett have been through a lot together — let’s focus on whether Jones is prepared to do now what he said he was prepared to do years ago.

Either do it or stop saying it. He’s the one who keeps setting the bar atop the mountain. He’s the one who keeps saying over and over how much he likes his team and his coach and how he thinks a Super Bowl is achievable. That’s Jones’ product. He’s selling hope as much as entertainment. At some point, it has to stop being a mirage because people aren’t going to keep drinking sand just because he’s calling it water.

OK, Jerry. Prove that there isn’t much you wouldn’t do.

Start by separating what is clearly a friendship with Garrett from the business partnership with him. Treat him like the head coach who is supposed to take the roster you built and execute the lofty goals you have set. State clearly what you’ve already alluded to during an emotional teeter-tottering over the past week: Either Garrett finally gets this edition of the Cowboys to the Super Bowl, or he’s done in Dallas.

Related: Jerry Jones through the years

Jerry Jones through the years

(Original Caption) Dallas: Jerry Jones, millionaire oilman from Arkansas holds a press conference at the Dallas Cowboys headquarters 2/25 evening during which he told those gathered that his former college roommate and teammate at Arkansas Jimmy Johnson, would replace Tom Landry as the Cowboys head coach.

UNSPECIFIED – CIRCA 1990: Owner Jerry Jones of the Dallas Cowboys on the field looks on prior to the start of an NFL football game circa 1990. (Photo by Focus on Sport/Getty Images)

CIRCA 1991 – Dallas Cowboys Owner Jerry Jones in this portrait on the field circa 1991 before an NFL football game. Jones has owned the Cowboys from 1989-present. (Photo by Focus on Sport/Getty Images)

UNSPECIFIED – CIRCA 1995: Owner Jerry Jones of the Dallas Cowboys talks with his head coach Barry Switzer (R) while on the field prior to the start of an NFL football game circa 1995. (Photo by Focus on Sport/Getty Images)

Dallas Cowboys Cliff Harris is honored by owner Jerry Jones with being added to the ring during halftime of a 26 to 10 loss to the New York Giants on October 10, 2004 at Texas Stadium in Dallas, Texas. (Photo by Wesley Hitt/Getty Images)

Terrell Owens, left, looks on as Dallas Cowboys’ owner Jerry Jones explains his thoughts on the risk of signing Owens at a press conference announcing Owens as a member of the Cowboys at Valley Ranch in Irving, Texas, Saturday, March 18, 2006. (Photo by Stewart F. House/Fort Worth Star-Telegram/MCT via Getty Images)

Cowboys Owner Jerry Jones poses with Atlanta Owner Arthur Blank before their team play on December 16, 2006 in Atlanta, Georiga. Dallas defeated Atlanta by the score of 38 to 28. (Photo by Don Juan Moore/Getty Images)

DALLAS – OCTOBER 30: (L-R) Dallas mayor Tom Leppert, Dallas Cowboys owner Jerry Jones, NBA Commissioner David Stern and Dallas Mavericks owner Mark Cuban sit together on stage as Dallas is announced as the host for the 2010 NBA All-Star Game during a press conference on October 30, 2008 at the American Airlines Center in Dallas, Texas. NOTE TO USER: User expressly acknowledges and agrees that, by downloading and/or using this Photograph, user is consenting to the terms and conditions of the Getty Images License Agreement. Mandatory Copyright Notice: Copyright 2008 NBAE (Photo by Kerre Randel/NBAE via Getty Images)

ARLINGTON, TX – SEPTEMBER 09: Jerry Jones, Owner, President and GM of the Dallas Cowboys attends the press conference for the 2014 The Cowboy Rides Away tour at Dallas Cowboys Stadium on September 9, 2013 in Arlington, Texas. (Photo by Rick Diamond/Getty Images for Essential Broadcast Media)

ARLINGTON, TX – AUGUST 28: Owner Jerry Jones of the Dallas Cowboys is pictured on the field before the start of the game against the Denver Broncos at AT&T Stadium on August 28, 2014 in Arlington, Texas. (Photo by Tom Pennington/Getty Images)

SEATTLE, WA – OCTOBER 12: Owner Jerry Jones of the Dallas Cowboys signs some autographs for Cowboys fans before the game aagainst the Seattle Seahawks at CenturyLink Field on October 12, 2014 in Seattle, Washington. (Photo by Steve Dykes/Getty Images)

ARLINGTON, TX – SEPTEMBER 23: Dallas Cowboys owner Jerry Jones gets a Arkansas Razorbacks Jersey for the 1961 Arkansas National Championship team during the game between the Arkansas Razorbacks and the Texas A&M Aggies on September 23, 2017 at AT&T Stadium in Arlington, Texas. (Photo by Matthew Pearce/Icon Sportswire via Getty Images)

SANTA CLARA, CA – OCTOBER 22: Dallas Cowboys owner Jerry Jones stands on the field looking on while his team warms up prior to the start of an NFL football game against the San Francisco 49ers at Levi’s Stadium on October 22, 2017 in Santa Clara, California. (Photo by Thearon W. Henderson/Getty Images)

Start by doing that. And then prepare a hellacious contingency plan for failure. Something truly indecent from a financial standpoint. Because let’s be real here: Jones’ net worth is pegged at $ 7 billion. He has the NFL’s most valuable franchise. His energy holdings in Comstock Resources is positioned to produce generational wealth. He has a super yacht valued at $ 250 million and rarely lays his eyes on something he can’t buy on the spot. But Jones is also in the winter of his life and can’t take the empire with him to whatever comes next. This means Jones is spending from what will eventually become an inheritance that is going to place his children in the top 1 percent of the 1 percent.

A golden carrot can be created. Money is no object. The Jon Gruden contract of $ 10 million per season over 10 years? Stop wasting time. How about $ 20 million per season over 10? There isn’t a coach in America who would turn down a guaranteed $ 200 million contract. If the New England Patriots’ Bill Belichick was available after the season, he’d have to think about that kind of money. And if he said he wouldn’t consider it, that means he wants to be offered more.

You said you’d consider something financially obscene, Jerry. Well, this fits that description.

Make good on that promise and then produce a list. Throw all the monster names in college on there. Nick Saban? He would have to think long and hard about $ 20 million a season. Lincoln Riley? Dabo Swinney? Show them the $ 200 million check and see if they try to argue they already have it better than the Dallas Cowboys.

Then go ahead and add in the best NFL coordinators — guys like the Patriots’ Josh McDaniels and 49ers’ Robert Saleh — but don’t make a mistake and stop there. Ignore whether the ideal candidates are currently head coaches of other NFL teams. If Jones is serious about one more Super Bowl, no one should be ruled out. Belichick supposedly isn’t an option? Who cares. Use the back-channels and find out. Sean Payton? Make that call. John Harbaugh? Kyle Shanahan? Sean McVay? Pete Carroll? Put them all on it and see if a situation develops that might surprise.

Above all else, put the kind of money behind this job to make people think you must be insane. That’s what this is going to take: thinking in terms that seem to be unachievable. You can’t know what’s possible with your next head coach until you consider that maybe nothing is impossible.

Before Jones gets to any of this, he must come to grips with what Garrett is and what he isn’t. Stop believing in Garrett’s speeches and start believing in the results. The Cowboys are 6-6 with one of the best overall rosters in the NFL. They haven’t beaten a single team with a record better than .500. They’re in postseason contention now only because the rest of the NFC East is a dumpster fire. And in nearly 10 years and more than $ 1.3 billion in player salaries paid out (yes, $ 1.3 billion), Dallas has two playoff wins to show for it.

I understand that Jones wants Garrett to be the guy so badly that he has convinced himself that he must be. Jones must consider that maybe he was wrong about that.

Remove the friendship that has you talking about the ups and downs you’ve both been through. Remove the ego that makes you say things about being the guy who knows the coaching room because you “made” the coaching room. And accept a few facts that you already know:

You once did a harder thing when you fired Tom Landry.

You once did a dumber thing when you split with Jimmy Johnson.

You once were “scared sh–less”, but you’re not that team owner anymore.

This is the opportunity to take all of that experience and do something with it. A chance to prove that there isn’t much you wouldn’t do for another Super Bowl. In the name of decency for the fan base — and the gnawing hopes and dreams of toasting one more moment of being the greatest of the greatest — fix this problem and do something financially indecent. Show that all of that bluster over the last few years wasn’t a string of empty words.

And above all else, stop selling the mirage. Nobody is drinking that sand anymore.

3 Ways to Avoid Regrets in Retirement